World premiere of Compared to What? to be broadcast on Showtime Networks October 23, 2015

We are proud to announce that Showtime Networks will broadcast the world premiere of Compared to What? this coming October 23. The premium cable channel selected the film along with documentaries on Marlon Brando, Jimi Hendrix, and Suge Knight. When Barney heard the news, he quipped, “I’m in very good company–though I appear to be the only subject who hasn’t spent 30 days in jail.” 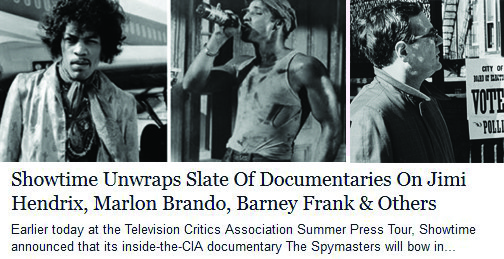 Home to such fictional hits as Ray Donovan, Homeland, and The Affair, Showtime began a major push into documentaries two years ago with its airing of RJ Cutler’s The World According to Dick Cheney. Showtime President David Nevins believes his network will have a real impact with documentaries, and he’s begun an initiative to air high-end, filmmaker-driven portraits of iconic figures.

We think the story of Barney Frank has found a perfect home in Showtime, joining an impressive roster of provocative and compelling documentaries by award-winning filmmakers. And with the election cycle ramping up, the October air date is the perfect time to reach Showtime’s 23 million subscribers.

Thanks to all of you for helping to make it possible!