The first openly gay Congressman in the United States (and arguably the most influential gay politician the country has ever seen), the pioneering Barney Frank looks back on his four decades in office in Sheila Canavan and Michael Chandler’s intimate and incredibly charming documentary. Quick-witted and lionhearted, the film’s candid conversations with Frank feel like something you could keep watching for hours without ever getting bored, and sheds light on how his own homosexuality informed the social justice campaigns he has pursued in office.

Compared to What should prove catnip to political junkies. Given apparently unfettered access to their subject as well as his husband Jim Ready, the filmmakers wasted no opportunity, filming everything from him dropping his shirts off at the laundry to he and Ready filling out their marriage license forms to their 2012 wedding reception. It’s a particular pleasure to watch the famously cantankerous politico warmly interacting with his spouse, who’s clearly mellowed him. His candor in discussing his sexuality and other subjects is endlessly refreshing in this era when politicians are mostly defined by their timidity.

In the documentary you get an intimate look into the life of a man who kept so much of himself a secret for so long. It’s an oft hilarious, deeply moving portrait of what is becoming a rare breed of politician—a man who says what he means, and who views his office not as a title to keep at all costs but an incredible opportunity to actually help the people he was put there to serve. …Throughout the film, you’re treated to one of Frank’s greatest assets, his laser-quick wit and his honesty. You’re left wishing there were more politicians, regardless of their party, and regardless of your political beliefs, who cared about the job of governing as much as he did.

This film will make you want to cheer—for a trailblazing activist whose personal journey mirrors our country’s journey toward equal rights for all, and for his knowing optimism, even in the face of a political system that seems increasingly broken.

The pace of a thriller and the tug of a desperate romance –Barney’s romance being not so much with Jim Ready as with this imperfect union we call our democracy. Boy, oh, boy, one can only hope and pray this film gets seen by everybody because it’s so powerfully instructive as to what public stewardship in a republic truly entails. Barney Frank is a glorious, cranky, flawed, majestical exemplar of a true public servant; and part of the heartbreak of the movie is not just that he’s no longer serving our country — he’s no longer there to save us from the not so better angels of our nature

This is the surprise film of the year. This intimate portrait of one of the greatest modern lawmakers shows the damning effect of living in the closet, the freedom of living free, the triumph of love and the steady, strong power that comes from being true to oneself. The film will change the way people think about political leaders who happen to be gay because it’s a story of Barney Frank, whose work impacted every American’s life. I was pleasantly surprised that the film is not a political documentary, but rather a story of a man and a life that is accessible. It’s fun and poignant.

There’s another story behind the headlines, the sound bites, and the ferocious debates. It’s a very personal story of how a gay man with political aspirations was able to both find success in government service in the pursuit of a better country for all, while also finding love and happiness in a world that for most of his life, was set up for gay men to fail. The documentary is ultimately a moving portrait of a man who stood up for himself and in the process advanced the rights of millions of Americans.

There’s always reason to be leery of profiles of partisan political figures, but Michael Chandler and Sheila Canavan have such a singular subject here that it’s easy to imagine it reaching across the aisle for support. But while Frank’s sexual orientation certainly plays a significant role in some of his political passions, the movie is more interestingly about his unique mix of blunt public statements and pragmatic behind-the-scenes approaches to legislating. And while it addresses the controversies that occasionally rocked his time in office, it’s less warts-and-all than a compelling profile of a man who just wanted to get things done.

The interviews are with political power players (on both sides of the aisle), Frank’s lifelong friends, and even a few enemies, who express their respect for the Congressman’s political savvy and reveal the surprisingly gentle soul behind the man who many times has appeared to be angry about something or other…I discovered a new Barney Frank here. He is not only an activist but also a man of optimism. He has helped lead this country in civil rights and managed to continue to fight for what he felt to be right at a time when the political system cannot get things together.

90.9 wbur Boston’s NPR® news station: One of the most talked-about films premiering at the Tribeca Film Festival in New York City this weekend features former Massachusetts U.S. Rep. Barney Frank. “Compared to What: The Improbable Journey of Barney Frank” follows the Newton Democrat, the first member of Congress to voluntarily come out as gay.

Documentary filmmakers Shelia Canavan and Michael Chandler say when they arrived in Washington to begin filming in 2012, they were struck by the demeanor of Rep. Frank, who was then in his final term: 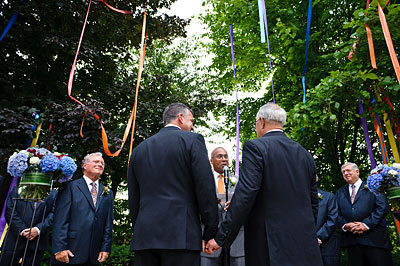